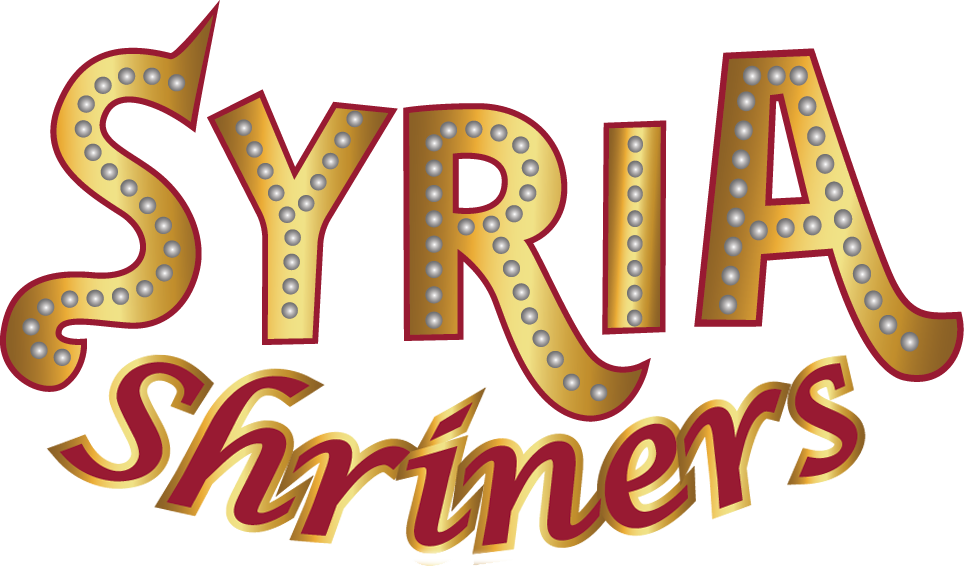 BY ORDER OF THE ILLUSTRIOUS POTENTATE

Effective immediately, and until further notice (at least for the remainder of this month), all Temple, Unit, Club, Caravan and other sub-group meetings, rehearsals and other activities scheduled for the Pittsburgh Shrine Center are canceled. This includes the meeting of the Board of Directors and Executive Committee scheduled for March 24.

We are frustrated, and share your frustration, but given the current public health concern, the demographics of our membership, and the response from Masonic, governmental, and public health authorities, we have chosen to act with an abundance of caution.

We apologize for the inconvenience this causes you. Please use email, telephone conference calls, virtual meeting software, and any other technology that may aid in conducting your business and communicating with your members. 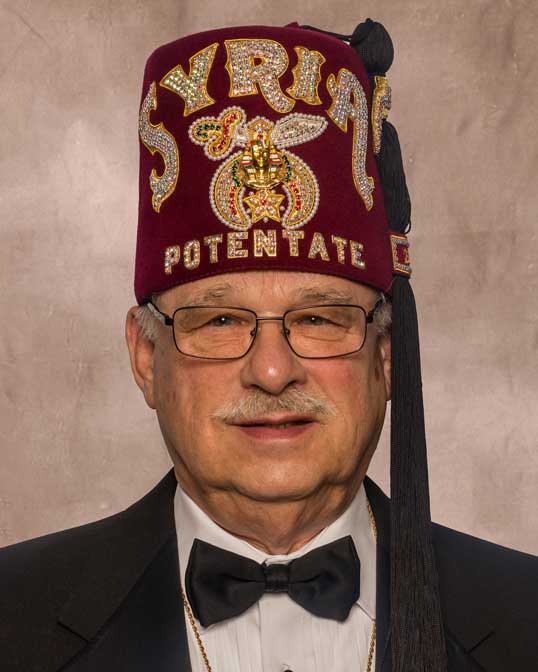 Yours in the faith,
Donald J. Taylor, Sr.
Illustrious Potentate

The same menu, entertainment, and enchantment will light up your evening, Saturday, October 24.

﻿It's the same great day, with all the same great fun, and the same great speaker, just eight months (to the day) after the originally scheduled date. Your tickets for the March 21 event will be used in November, so don't throw them away!

Pittsburgh Shrine Center Office Policy for the remainder of March, 2020

Pittsburgh Shrine Center Office Policy for the remainder of March, 2020

Your Shrine Center office will be open to answer phone calls, receive mail, pay our obligations, allow our auditors access to our files, and carry on other essential business, but we ask that you not make personal visits to the office until further notice, at least for the remainder of this month.

Our staff will be taking proper precautions, following the guidelines established by the World Health Organization and Centers for Disease Control and Prevention, in practicing social distancing and preparing our workplace for this public health concern.

We appreciate your understanding and cooperation in this matter.

From the Desk of Robert T. Addleman, Jr., P.P. and Recorder

TO THE NOBILITY OF SYRIA SHRINERS:

March 13, 2020 - This statement is an effort to provide you with the most up-to-date information regarding upcoming Syria Shriners events and other events scheduled for the Pittsburgh Shrine Center.

It has come to my attention that rumors are circulating throughout the nobility that are spreading inaccurate information. We were hoping to be able to make one statement concerning these activities, but it has become clear that we must communicate with you now, while certain details are still being determined.

We are fully disclosing the details of all events as we understand them at this time. Accordingly, this email is lengthy. We apologize for that, but want to be fully informed of all developments.

First, all events scheduled for the Shrine Center this weekend
(MARCH 14-15), WILL PROCEED AS SCHEDULED.

Rocky Bleier contacted us at 12:10pm, Friday, March 13, to inform us that he would be unable to attend “the stag.” The Potentate, Banquet Chair, and other advisors had been weighing options, including suspending the hospitality rooms, and the banquet over the last few days. When Rocky canceled his March 21 appearance, but readily indicated a willingness to appear at a later date, the decision was made to postpone the event.​

We are nearly, but not completely certain that we have a date to reschedule the stag. We expect to be able to make that announcement Monday, March 16, as soon as we are 100% certain of Rocky’s availability. Rocky has indicated his availability on the date we have selected, based on the schedules of the hotel and the Potentate, but wants to confirm that his secretary has not booked an engagement of which he is not yet aware. We had hoped to confirm that information today, but were unable to do so. Hence, we anticipate an announcement on Monday.

The inaccurate information being disseminated by rumor-mongers forces us to make a statement now, however.

In April, the Bunny Bash, scheduled for the Shrine Center ballroom,
​Saturday, April 4, has been canceled.

​We will attempt to schedule another party for our kids at a later date.

The Quarterly Meeting and Ceremonial, scheduled for the Shrine Center, Monday, April 6, has been postponed. We will announce the rescheduled date as soon as possible.

The Potentate’s Ball, scheduled for the ballroom, Saturday, April 18, will be rescheduled for a later date. Again, as soon as we know when that will be, we will let you know.

The Swing Time dance, scheduled for the ballroom, Friday, April 24, is still on at this time. We will evaluate that as developments continue.

At this time, we anticipate holding all of our events in May - and later -
as scheduled.

Further developments will determine whether any of those events needs to be rescheduled.

We apologize for any inconvenience caused by our schedule changes, but we have decided to act with an abundance of caution as we all deal with this public health matter.

Stay safe, be sure to practice proper hygiene, and follow the recommendations of federal, state, and local public health agencies, and government authorities.

Yours in the faith. 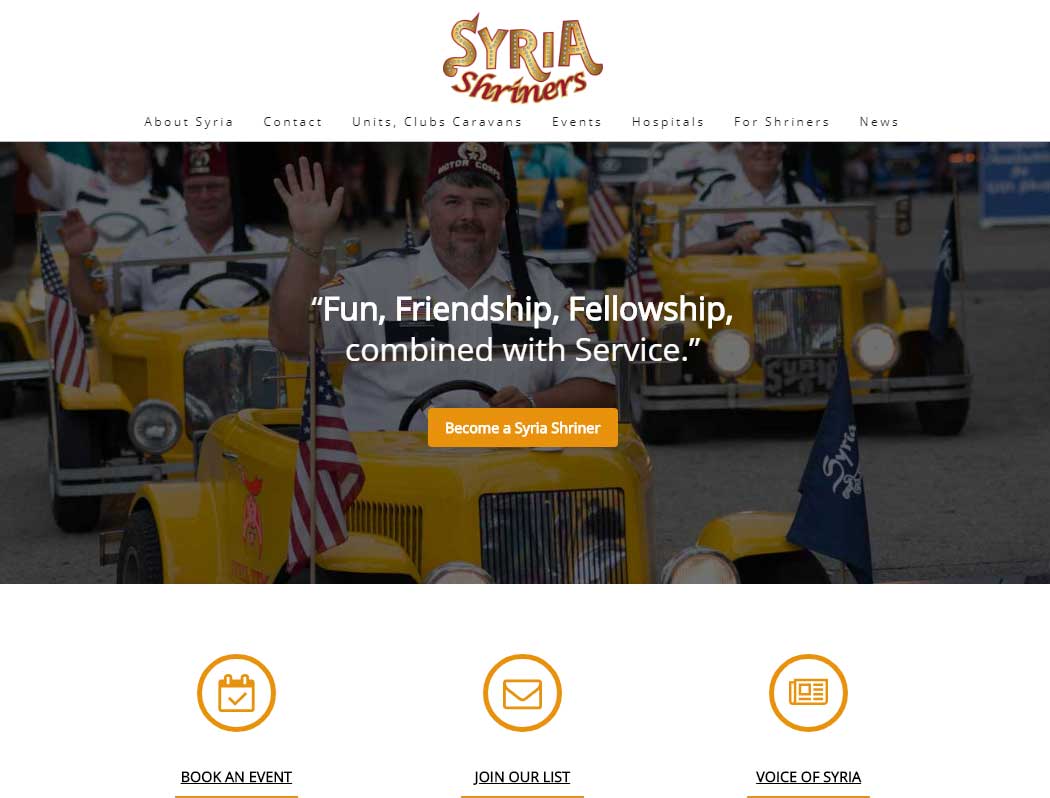 Nobles throughout the Oasis take notice, the Syria Shriners are pleased to announce to one and all the debut of our new website!

The address is still the same, www.SyriaShriners.org, but we now boast a fresh new look. The new site adds modern functionality that we hope will serve the Nobility's desire for a strong online presence to promote the activities of our Temple.

The newly designed website satisfies the vision of our 2018 Potentate, Bill Branthoover. Our Illustrious Sir decided this spring to make the site redesign one of his focal projects this year.

"It is my great pleasure to announce the release of our new fraternal website, Bill said. "It is my hope than an improved online presence will help educate and inform both the nobility and the public, who express a desire to learn more about our wonderful fraternity and all that we have to offer."

The site is proud to offer each Unit Club and Caravan their own space to showcase the purpose, history and activities of each to current and potential members.

New links will guide site visitors quickly to resources and information about our Shriners Hospitals for Children, information on becoming a Shriner and of course, Freemasonry in our great state of Pennsylvania.

Additionally, we owe an immeasurable debt of gratitude to our two talented Nobles Tim McKiernan and Tom Ruch of McKiernan & Ruch Photography. Without their incredible creativity and generous permission, the site would not be as beautiful visually. Their hard work truly serves as an amazing record of the activities and people who make our Temple as great as it is. Thank you, both!

We hope you all will enjoy this new site well into the future. If you have any comments about the new site or if you have content updates or suggestions that may help to improve it, please feel free to send us a note via the contact page.