The Mission of Shriners International is:

It was Fleming’s idea to establish a fun fraternal order for men who had completed their requirements in the Scottish or York Rite Masonic organizations.

On September 26, 1872, the original 13 members met in New York’s Masonic Hall, 114 East Thirteenth Street, for the purpose of formally organizing the Ancient Order of the Nobles of the Mystic Shrine (A.A.O.N.M.S.) for North America. The Shrine was born. (The organization is now known as Shriners International.)

The new Shrine was not an immediate success in terms of membership. The spark that was needed to make the Shrine prosper apparently was formation of the Imperial Council.

That first meeting of the Imperial Council was brief, but in addition to election of officers it accomplished the establishment the following temples: Mahammed in New Haven, Conn., Ziyara in Utica, N.Y., Pyramid in Bridgeport, Conn., and Syria in Pittsburgh.

Samuel Harper, the first Potentate of Syria Shrine, was among those selected for roles as Past Potentates on the first Imperial Council.

At the February 6, 1877 meeting The Council also voted to present each new Noble with a certificate, specified official jewels and costumes for the respective offices and required each new temple to select an ancient Arabic or Egyptian name.

Samuel Harper served as Potentate until 1884. Organizational activity was limited for several years, but Syria Temple seemed to gain new vigor at about the time of the first ceremonial meeting, held June 13, 1883 in the Old Library Hall of Precious Memory.

It was between the late 1880’s and the early 1900’s that the Shrine enjoyed great membership growth and vigorous program activity. 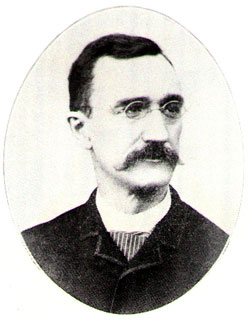 The famous Shriner’s fez was the subject of new legislation in 1915. New regulations prescribed that the red Turkish fez with black tassel be adorned only by the name of the temple and the scimitar and that part of the jewel of the order including the sphinx head and star. 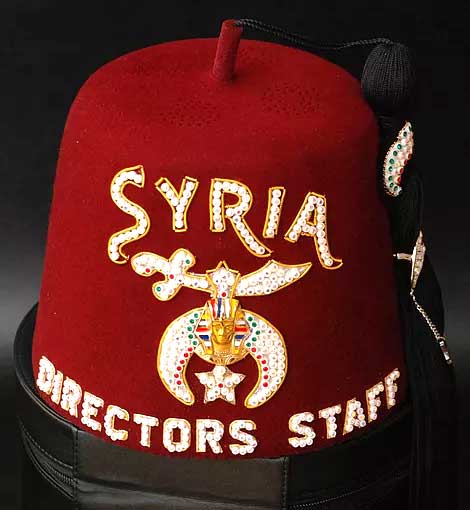 Syria Temple was prominent in Shrinedom long before thoughts turned to the Mosque project.

With humor befitting the Shrine philosophy, two Nobles named Kerr and Barber wrote in a brief history of the Temple dated August 6, 1919:

“Along in the early 70’s, the founders of the Ancient Arabic Order of the Nobles of the Mystic Shrine of North America on looking around, decided that Pittsburgh was a suitable place to rest the camels of the great caravan, that the shade of the old apple trees was cool and delicious, and that her Shareefs, Bashi-Bazooks and wail-dervishers were thirsty for knowledge.”

Syria’s ceremonials and meetings were held in Library Hall for several years until quarters were secured in old Turner Hall on Forbes Street. These quarters were used until 1902, when the first home was built on Washington Street, which served until 1911 when that building was sold and the property was purchased in Schenley Farms. Ceremonials were held in the Exposition Building, Soldier’s Memorial Hall and the Schenley Theater.

Syria Temple surely drew some of its vitality from its great Mosque. Rising from a cluster of stone and marble structures in the venerable Schenley district of Pittsburgh, this Mosque flamed out like an oriental jewel.

in 1913, the directors of the Syria Improvement Association mailed a prospectus outlining plans for a building on the old Schenley Farm land.

Ground was broken for the new temple on April 20, 1915 (image at top) and the cornerstone was laid on June 19. Formal dedication of the great building was a week-long affair, beginning October 23, 1916. Formal dedication ceremony was held October 26th. An estimated 40,000 guests attended the various activities. 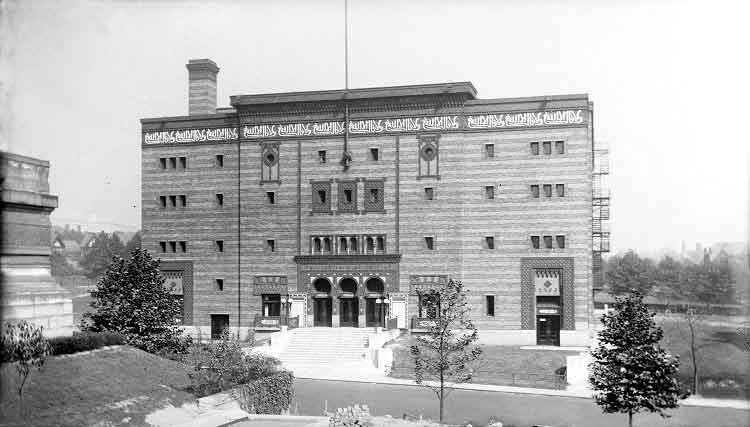 The largest inscription around the top of the mosque was taken from the seventh line of a 12-line poem dated A.D. 1353-60 on the Narkby Text and read as follows: “Thou hast risen on the horizon of the kingdom of mercy to disperse what there was of dark oppression and justice.” Under each window is the small Arabic inscription, “There is no conqueror but God.”

Another feature which impressed visitors both then and to this day is the set of bronze sphinx, two of which guard each portal of the building. The sphinx were sculpted by the sculptor G. Moretti after a suggestion made by Potentate Joseph N. Mackrell that an appropriate memorial be erected in memory of Nobles of the temple who served in the Army and Navy during World War l. There had been 529 such members, and their names are inscribed on the sphinx. The unveiling and dedication of the sphinx took place November 1, 1919.

The mosque represented an initial investment of half a million dollars and brought to the famous group of institutional buildings in the Schenley district a distinct new architectural touch. It was recognized as one of the best examples of “exotic revival architecture.” The 3,700 seat Syria Mosque ushered in a grand era of social and ceremonial events, and for nearly 75 years it contributed greatly to Pittsburgh’s cultural life.

The Pittsburgh Shrine Center is Born

A movement began in the late 1980's to replace the aging Syria Mosque with a new facility that offered greater amenities to suit the needs of its members and its special events business. The Syria Mosque went up for sale in June of 1989. The building was demolished August 27, 1991.

Great effort was spent to retain some of the classic features of the former Mosque, such as the twin sphinxes which guarded the entrance and the immense chandeliers which hung in the auditorium. 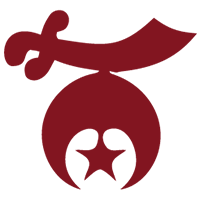