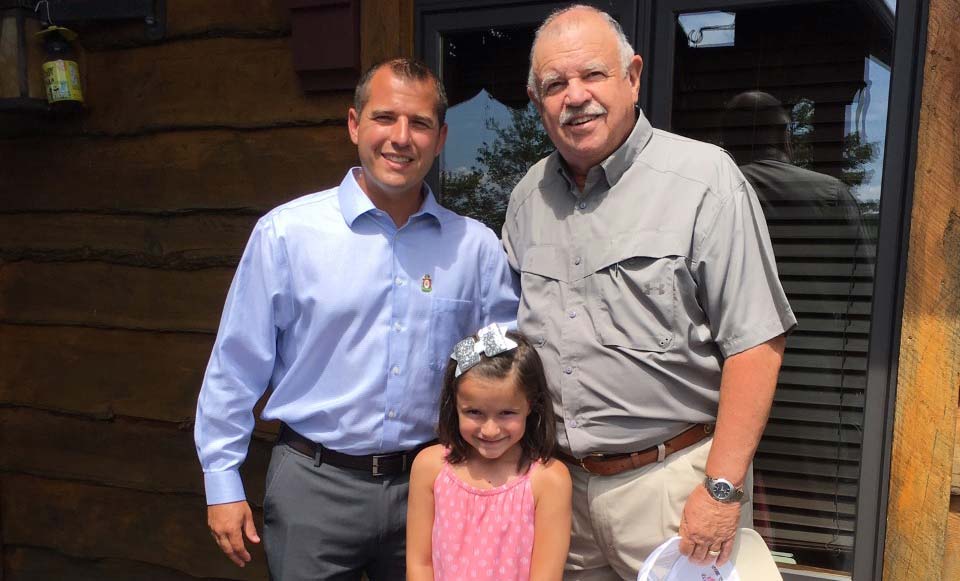 In 2015, prolific sporting clays shooter and Syria Gun Club member Jim Nassif approached then-Potentate Bob Herbert with a proposal. Their vision was to pair a love of sporting clays with an event that could generate a charitable funding source earmarked for Shriners Hospital for Children - Erie. Without hesitation, the concept was approved, and the Sporting Clay Charity Shoot was born.

From concept to successful event is typically a long road, but these quick-acting Nobles saw the potential. “We went through Shriners International Headquarters to get it approved,” says Bob Herbert, Past Potentate. “We had to hurry (in our first year). In less than 6 weeks we had the event planned and raised $29,000. Jim and Eddie do a great job with sponsors and event planning.” 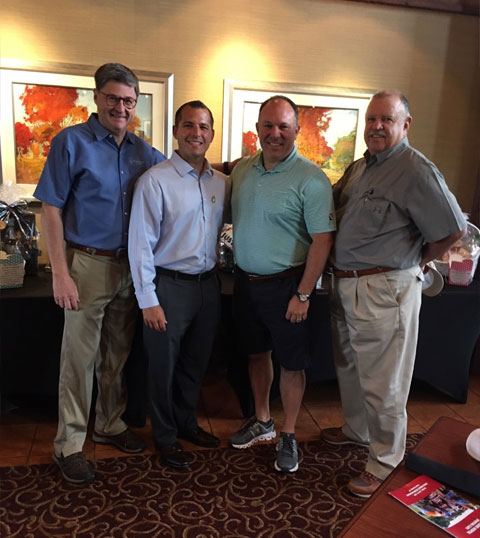 Noble Ed Aiello was an early supporter of the event and joined in the planning. “Our thoughts were to try and improve the identity of the Shrine to young people who shoot and use it as a forum to talk about what we do,” Ed said. “We’ve brought in patients and their families to talk about how the hospitals have helped them.”

The venerable planning committee deserving of the credit for the Charity Shoot’s success has consisted of Nobles Andy Young, Jim Nassif and Ed Aiello. Dave Galardini has always been a strong supporter, and Jason Ross joined in 2019.

Noble Jim Nassif describes the event as appealing to the sporting clays shooter. They offer a continental breakfast, 100 rounds of sporting clays, lunch, gun raffles, 50/50, auction items, men’s and ladies’ trophies and special room rates all set in the beautiful backdrop of the Laurel Highlands at Seven Springs. 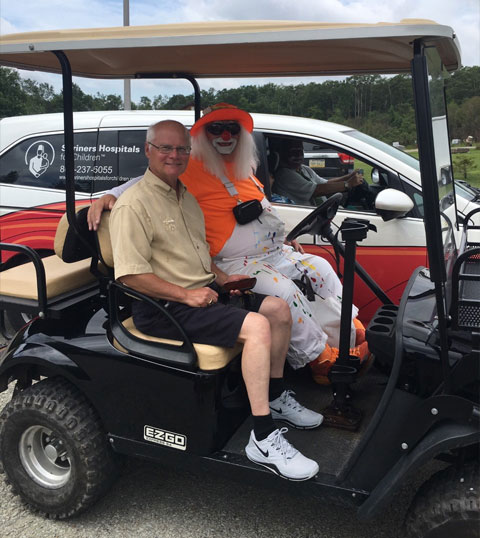 It’s a purpose-designed event that benefits our mission: to support the SHC-Erie Hospital. A day of sport shooting fun delivers more value to those contributing than a donation alone. Shriners Hospitals for Children is a fully qualified 501(c) 3 charitable organization under IRS regulation. Sponsor’s and participant’s donations ARE tax deductible to the fullest extent provided by the law. “The participant’s money donated is a deduction, plus you’re doing great work for the philanthropy. It’s a win-win in a single day event,” says Bob.

FUNDRAISING FOR THE HOSPITAL

Ed Aiello describes how this event attracts considerable sponsorship dollars, “What we do is contact (Erie) hospital and find out what capital projects they’re working on, this year it’s two new state-of-the-art Skytron surgical operating room tables. We like to tell sponsors what we’re funding instead of simply collecting money for the hospital.“ 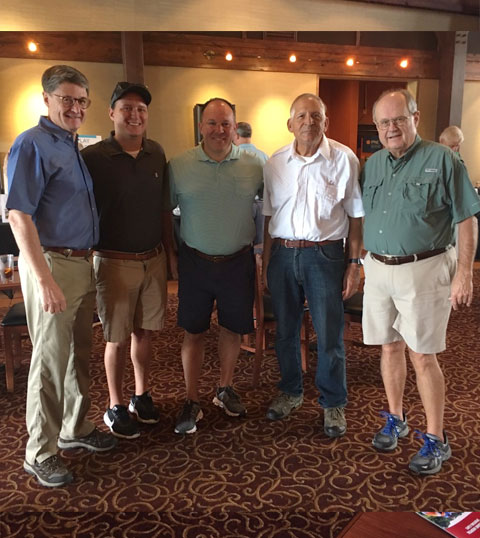 Selecting a specific capital improvement project to support through the charity shoot has gone over so well with sponsors that in five years this event has raised just under $415,000 for Shriners Hospital for Children - Erie.

This year’s total is $83,400 and, coupled with an ‘Erie Gives Day’ contribution, the 2019 edition looks to net nearly $96,000 to help purchase this incredible equipment. On Erie Gives Day, each dollar donated to Shriners Hospitals for Children will also receive a prorated match from The Erie Community Foundation and its sponsors. The amount changes each year based on the dollars in the Erie Community Foundation's special fund, but typically amounts to 13-15%. 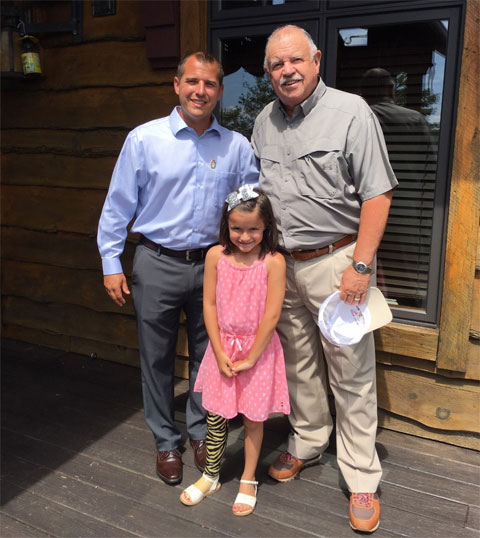 At the annual Imperial Session, a Temple Sports Report is given detailing how much money is raised from sporting events sponsored as charitable fundraisers for Shriners Hospitals for Children. This year, 30 Temple events were highlighted that consisted of high school and college All-Star football games, hockey games, golf outings etc. Not one of these events equaled the earnings of our 2017 and 2018 Sporting Clay Shooting events.

Bob knows very well how successful the concept has been, “Not one of those events by another Temple has gone over 100K in this year's Temple Sports Report, and they have not beat what the Syria Gun Club's Charity Sporting Clay Shoot did in five years.”

Noble Andy Young was instrumental in gaining the early support of the Syria Gun Club. He passed away on June 28th, 2019. Andy was an active Mason in Perry Ionic Lodge #796 and a Shriner in Syria Shrine where he served as Shrine Ambassador, Shrine Gun Club past president and secretary. Andy was an active member of the Sporting Clay Shoot and its planning committee.

“Andy Young he was the BEST,” Jim Nassif said, “and a great encourager and supporter of our fundraiser. The Shrine lost a great man!”

“This year, the money will be donated in memory of Andy Young. Andy was one of the chief supporters from the Gun Club, so we’ve decided that when the money goes in it will be a contribution in the memory of Andy,” Ed said.

Planning for 2020’s Sporting Clay Charity Shoot will begin later in 2019, and the Gun Club is requesting your support. Participants can come for lunch only or join in the fun and shoot. Bronze, silver and gold sponsorships are available, and all donations benefit Shriners Hospitals for Children - Erie. Contact Ed Aiello for more information

“We do this for the children,” says Bob Herbert. “The Shriners have 22 pediatric specialty hospitals that help thousands of children each year at absolutely no cost to their families. The hospitals help children who have problems of the bones, joints or muscles, and children with cleft lip and palates or who have been severely burned. Three of the orthopedic hospitals also specialize in treating children with spinal cord injuries. In addition to the medical care provided to children by Shriners Hospitals, most of the hospitals are also actively engaged in research, searching for cures to crippling childhood diseases and better treatments for burn injuries. The operating budget for Shriners Hospitals for Children is approximately $2.2M dollars every day. Every time we treat a child, we are improving that child’s life. We appreciate your support and the support of the kids. It’s all for the children.”

Caring donations made to Shriners Hospitals for Children, Erie

On February 4, 2019 noble Donald Green and his wife, Debra from Munhall were thrilled to deliver a car full of toys to Becky and her staff at the Shriners Hospital for Children- Erie.

The toys were given by an anonymous donor with the hope of bringing smiles to the faces of the children at the hospital. 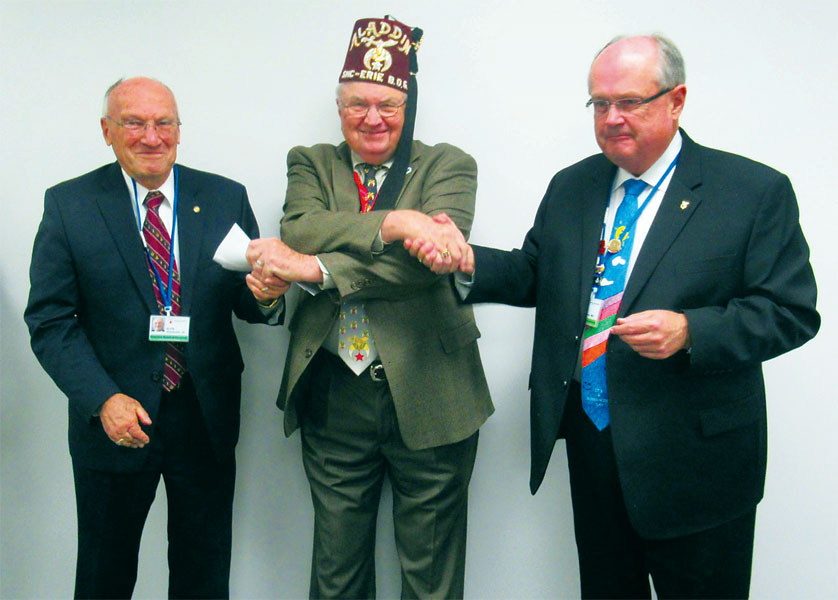