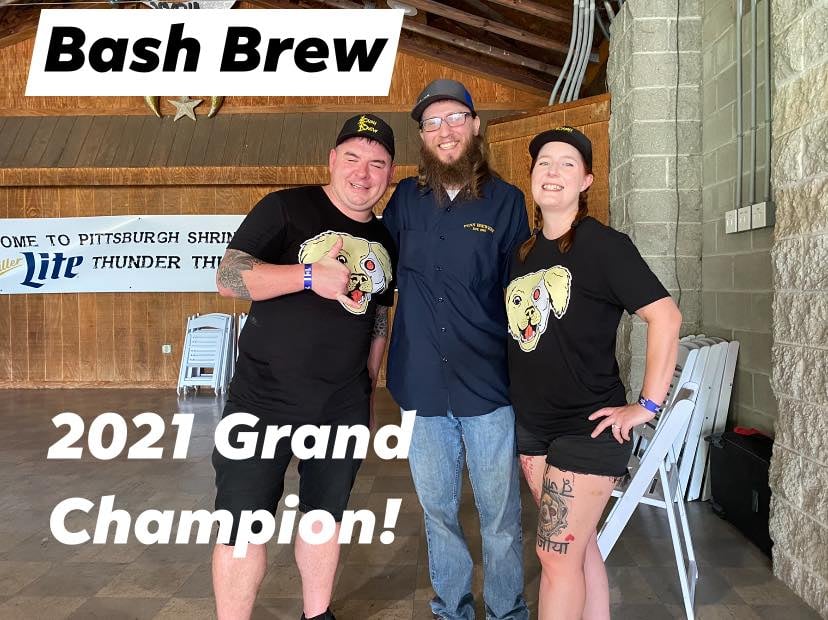 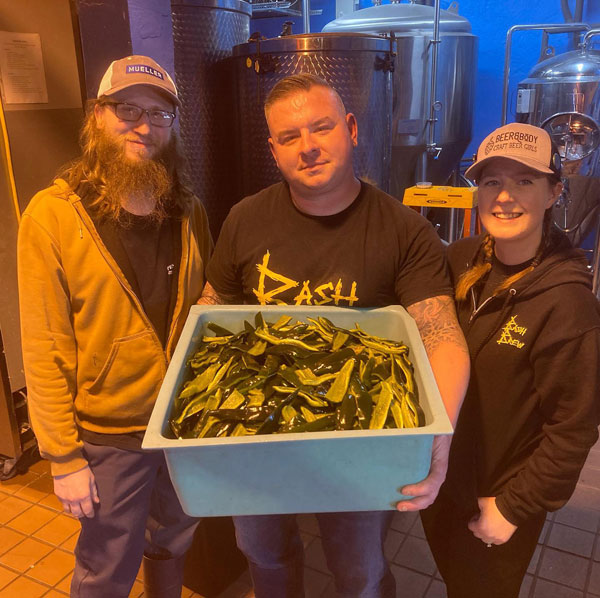 "It was a great day brewing with Penn Brewery."

Thanks to an incredible annual partnership with the NHHBF, our Grand Champion got to brew their winning recipe, Tortuga En Fuego, at the Northside's legendary Penn Brewery.

The end product? “I think it comes off a little crisper, a little lighter in the body of the beer," says Adam, "which I think is nice. I think the peppers come through even more too.” Lori finds it a bit hoppier too. “The lightness and crispness comes from it being a little more filtered than we do at home."

It was Christmas 2013 when Adam's dad bought him a starter kit for making home brewed beer. Hi father obviously noticed his son's potential to become a champion beer brewer. He hasn’t stopped since.

Although he's a Pittsburgh-native, Adam used to live in Washington DC for a few years right around the time he began brewing beers as a hobby. To gain knowledge on home brewing, he did a lot of research online, and a local brew shop helped to fill in with guidance and equipment.

However, something was lacking. He credits the home brewing scene and participants in Pittsburgh as an important part of his craft.

"Especially (having) been in Washington DC for a couple years, not finding that brotherhood, and that family-type atmosphere.. but upon coming to Pittsburgh and finding it immediately," says Adam. "The home brew family never leaves. Some go pro, but they continue to give back. As more of the Pittsburgh home brewers go pro, we support them and the brewers that went pro come back and support the home brewers.  I really like the city and what we’re doing with beer."

Reaching the pinnacle of home-brewing achievement in Pittsburgh has been great for the Bashlines and their nascent brewing project 'Bash Brew'. There's been incredible buzz on social media. Adam happily shares that the local craft brew scene has caught on, and eagerly want to know what he and Laurie have cooking.

"People in our circle know us," Adam says. "Slowly but surely making a name for themselves. We brewery hop all the time, and we’re asked 'when’s it coming out'?!"

Brewing at Penn Brewery at scale may have more pumps, filters, and bigger equipment.

It was a cool day. I wasn't sure how it was going to work coming into a very large, very established brewery. I thought, I might just stand off in the corner and  take pictures. We came in, sat our coffees down, Lori went to cutting peppers, I started dumping grain for the mash. We were super hands on the whole day. It was great, it was a really cool day.

Adam and Laurie participating in the brewing process for their 2021 NHHBF Championship entry Tortuga en Fuego at Penn Brewery. 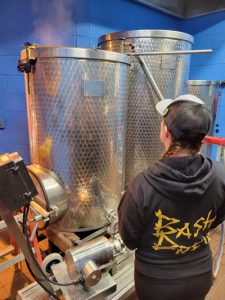 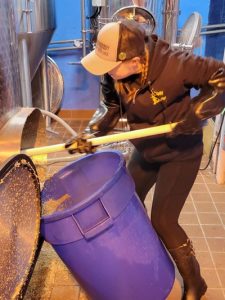 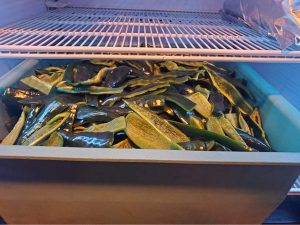 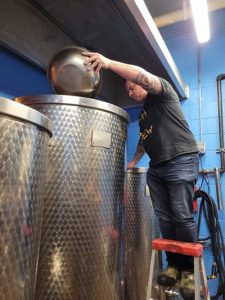 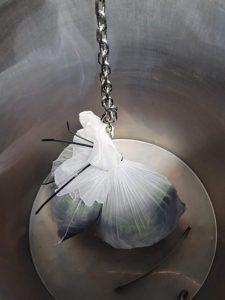 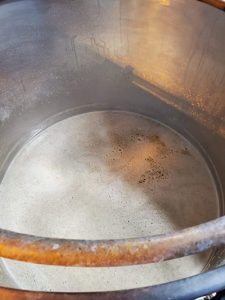 CREATIVITY ADDS TO THE RECIPE

It's impossible not to notice the artistic illustrations that Bash Brew applies to its labels and the creativity they use to name each brew. This dynamic duo has brewing expertise and branding all under one roof.

Sporting an Art Degree from Clarion University, Laurie, the first lady of Bash Brew, handles all the design work for merchandise, beer signage, and their social media presence has grown a lot over the years. With such attention grabbing graphics, it's easy to see why.

Laurie's artistry extends to the kitchen as well. She's come up with some of Bash Brew's most popular recipes.

Laurie is an expert when it comes to the spices and flavors that make some of the unique brews. This reporter almost fell out his chair while listening to her describe a pumpkin stout dessert beer which included an entire pumpkin roll pastry added in post-fermentation. Adam calls it his “A Warlock Stout tribute” made it a few times before.."

Adam credits the persistent persuasion on behalf of North Hills Home Brew Fest founder, Bryan Llewelyn, with getting him to compete. (Let that be a lesson to all you up and comers, you can't win if you don't show up!) Adam missed the first NHHBF by not competing. The second edition he was on vacation and the 3rd edition was preempted by getting married. But by the time of the 4th edition - first attempt - Bash Brew was declared winner.

Before Covid, Adam and Laurie met their production capacity of 5 gallons at a time and went to beer festivals as often as they could. Right around May 2020 they finished up a ten 10 gallon set-up to double their production.

You can tell from talking with him that Adam is not only an exceptional brewer, but he's a pretty special guy, too. Adam's kindness towards the home brewing community is evident. He says that if there's a charity or good cause involved like supporting the NHHBF, or Brewing up a Cure, for example, he's there.

ADVICE FOR THE NOOBS

So the glitz, glamour and regional notoriety of a North hills Home Brew Fest Championship sounds appealing to you, eh? Well the Champ says it's easier than you think to earn a chance to rank among the local brewing nobility.

"Come to a meeting at BASH, TRASH, WAZE, TRUB, Adam says. "Meetings are open to the public, and you can come and talk to members and get their opinions. Start small, start cheap. You can make good beer in plastic buckets. We ferment in stainless now, but the first 5 years I was in plastic. It’s completely drinkable and knocks the pants off of the big commercial brews.  It will get you a fresher, brighter beer."

Like most hobbies, there's a low barrier to entry to jump into the home brewing game. Adam and Laurie say to chase your beer brewing dreams you'll eventually want to step up your game.

"It does get to be an investment, but if you start cheap and you like it, that investment is going to be worth it. And you can always reach out to us at BASH BREW."

The smaller local craft breweries in PGH, you can catch their head brewer, at the end of the day, I have yet to meet a bad person in Pittsburgh craft brewing. They’ll answer our questions, they’ll answer your 11:18 questions. They’re more than happy to talk about it.

Don't miss Adam and Laurie's campaign to retain their crown as they and other past champions compete against Pittsburgh's best home brewers at the 2022 North Hills Home Brew Fest, held Saturday August, 27th. Learn more about the event, and get your tickets right here: 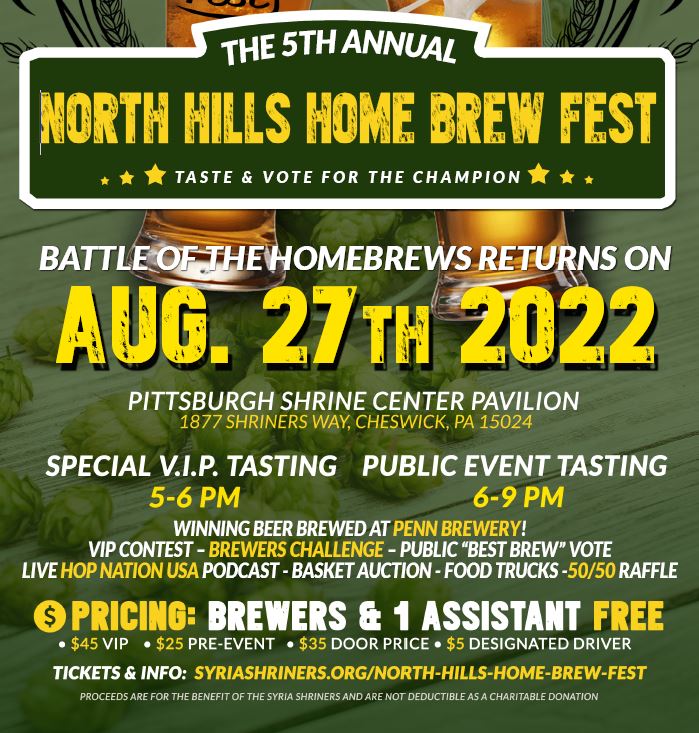