The Shriners Band of Pittsburgh provide fellowship and brothership through music performance.

In 1902, when Syria Temple was comparatively a baby, Potentate William H. Walker appointed William Wright, George Goser and Frank McComb members of Syria Arab Patrol (now known as, The Patrol), who were authorized to organize a brass band.

Shortly after, Charles W. Easton, a prominent orchestra leader, came in as a member of Syria Temple and was induced to become interested in the band. Through his efforts, several professional musicians were enrolled in the then small membership.

Noble Jack R Anderson was nominated and elected to Director in 2014.

Noble Anderson is a long-time member of the band and recently retired Director of Bands of the University of Pittsburgh. He will continue in a long line of great Directors of the band. Noble Anderson has led the band to several first place and second place trophies at MASA. 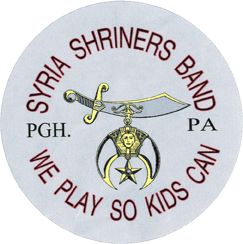 The Band rehearses every second and fourth Thursday, 7:00pm-9:00pm, at the Shrine Center in the rehearsal room.

The Band marches in many parades throughout the Pittsburgh Area as well as performing several concerts a year. The Band, Chanters and Highlanders also perform a joint concert. The band also makes the annual trip to MASA to compete.

Any level of musician is welcome to join. No auditions needed.

For anyone with questions on membership, please contact Ken Yarnot, 412.398.1158